Review: The Enchantress by Michael Scott 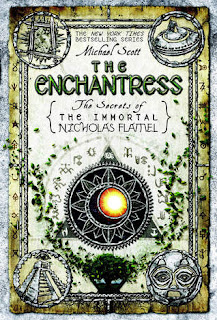 The Enchantress by Michael Scott
Book Six of The Secrets of the Immortal Nicholas Flamel
Published May 22, 2012

Our journey with this series began in 2007 with The Alchemyst. Six years later, the series comes to an end with The Enchantress. I fell in love with this series from the first book and I craved each summer for the next one to be released.

I realized however that I never posted reviews of the first three books, so for those who might just be entering the series, take this review with an extra grain of salt because it will have a slew of things I was bothered by at times and then all my praise, too.

There is so much terminology in this series that, after the second book, I started becoming confused at times. Here is your run down of characters in terms of hierarchy: Earthlords, Archons, Great Elders, Elders and Dark Elders, Immortals and Humani. Whew! And that doesn't even touch on some on the insanity that comes with trying to pronounce these character's names. So, with all of these big players throughout the series, you continuously read about Immortals and Elders. We never meet a Great Elder or an Archon, and only at the very end, do we meet an Earthlord. It's pretty cool, but it's also very much a cop out. You meet them, they turn out to be the big bad of the whole series (No spoiler there. Trust me!), and then they die just like that from a well placed sword strike from one of the protagonists, Josh Newman. Yeah, so huge disappointment there. I wanted more epicness, as the whole last book essentially takes place on the equivalent of Atlantis (called Danu Talis in the series).

Aside from a few grammatical errors I ran into, I can't help but wonder why there were so many plot hitches in this book. In the other books, there were few if none. Here, a lot of things are left unanswered at the end, such as the Archon and Great Elder thing I touched on. Other things include the future of some of the characters. When a series ends, it must wrap up. And here, there were just a few things that bugged me. I can't say too much for the sake of keeping this spoiler free.

That said, the book is also very slow. This is primarily because of what happened in the fifth book, The Warlock, leading into The Enchantress. Now, because most of the book takes place on Danu Talis, we have to be brought back to modern day San Francisco where the city is about to be run over by the darkest and most feared mythical monsters in legend. Two of the other big heroes of the series, Nicholas Flamel and his wife, Perenelle, are trapped in San Francisco with some Elders and other Immortals that have sided with them to stop the monsters and by time for Josh and his sister, Sophie, to figure out their destiny back in Danu Talis. I really, TRULY expected them to eventually get back to Danu Talis toward the end of the book and assist Josh and Sophie in the final conflict, but that also doesn't happen. Again, sort of a let down.

The final revelation in the book, which in Kindle time is in the last 10% of the book (because it's lame and this book didn't have page numbers) is pretty cool. It's actually very cool and I didn't foresee it at all. I read other reviews on the book and some wrote that they weren't surprised at all by Josh's fate. Uh, sorry. I was very surprised. From The Alchemyst, we learned of the prophecy that involved Josh and Sophie as the Twins of Legend, the fabled Gold and Silver, who would be "One to save the world, One to destroy it." As the series progressed, most of us got the idea that either Josh or Sophie might go Dark Side on everyone and become an enemy. Again, not true and the exact meaning behind the prophecy is deeper than the surface leads to believe.

So, I feel like I ranted a lot of negativity on this book, but don't get me wrong: I LOVED EVERY BIT OF THIS SERIES. Do not let the rating at the top fool you. Could it have been better? Yes. Could I have done better? Probably not. So kudos to Michael Scott for finishing off this series with a touching ending. For those of you who are looking for a great YA read, this is the pick for you.