Starting today, and extending until March 28, is the "A Picture Paints 1000 words" blogfest,  a collaborative blogfest hosted by the bloggers at Unicorn Bell.

Redirect yourself back to the blogfest participants here to read the other submissions.

The object was to choose an image provided and offer up for tribute out 1000 word piece of fiction. I chose to use two images, as both stuck out to me to create a piece of flash. I have chosen image number five (5) (which, by the way, is the cover art of Cursor's Fury by Jim Butcher...) and image number nine (9).

I’ve often heard the price for immortality is greater than any mortal man can pay. No matter how deep his pockets, how invested in his trade or how mighty his reign over others, no sane mortal would divide his soul. I suppose that makes me one of those insane men who have given away everything. My life, my loves and past triumphs: all for naught when I chose my new life. For I brought death to my country and kingdom. To my family. All that remains is my greatest treasure, locked in a tower far beyond any mortal’s ability to escape.

Now, I stand on the east most garrison of my kingdom. A mighty fortress now empty, for those men who once quartered those beds and tables lay in pieces in the courtyard at my back. There are a few strangled cries that reach me, but I cannot turn to regard them. I keep my will focused on the rite at hand. Missiles, both of physical means and ethereal, collide against the shield erected around me. It will not hold for long. Blue-white sparks spit out from the shield in a curtain over my foes below me. Amidst the sizzle of sparks and missiles whizzing around me, a voice comes. Old and wizened, so far beyond reconciliation.

I at last turn on one foot and bring my eyes to the broad shouldered man bearing a burgundy mantle about his upper body. It drapes in thick folds on his left and right, concealing his arms, and splits at his waist, only just revealing his tree-trunk legs. Yes, far beyond saving this one is. This one, who was my captain. Who finally rebelled and brought a schism to my rule.

“What can you see from there, my king?” Draggil asks me.

“I see the great black sea, the country on either side that nestles its wrath like a bottle.”

“There is nothing beyond the sea. We do not sail that way.”

Draggil made a motion to divide my men up the left and right towers that would intersect to my point on the garrison. Should I have smiled, our conversation of what he would conquer next would have gone on. So foul is Draggil’s breath these days, I do not give him the pleasure. My men are swift on their approach, but as they’ve been trained, they slow in their advance because they know I am a threat to Draggil’s new order.

“I have not yet split my soul, Solomon. I will not become a product of demon worship, as you. Did you not know this would befall you?”

“I have guessed your loyalty was stretching thin. Like a rope whose service of strength has run its days. They eventually fray, single threads at a time by stress and amounting tension.”

“A rope?” He laughs to the men still at his back. They join. “The mighty Solomon of Firemarch compares his enemy to a rope. You are a wreck, truly befuddled to what must be done to erect our country into the grace it once stood for.”

I try not to listen. All I smell is Draggil’s breath and it hinders my concentration. The rite has another minute or so before we all will die. The men on my sides inch, tirelessly awaiting the first break in my shield. The sea churns at the rocks below. Streaks of black become visible in the murky blue. Grey clouds mask the setting sun and pink sky. Draggil is still speaking, but I only concentrate on the sea. The wakes grow, but there is no wind to push the water.

Galek has arrived in Firemarch.

“What do you know of my deals with demons, Draggil?” I ask. The men surrounding me have not yet caught on. My eyes are locked on the water and the abyssal pits opening over its surface, like holes being punctured in cloth.

“It has destroyed your kingdom,” he says. “You gave your demon everything to obliterate your enemies, and yet you somehow you have made more.”

“One half a soul made me immortal,” I say. “What would you wager offering the remaining piece to it would give me?”

“You will gain no more.” He waves his men at me and the two closest shove their spears at my barrier. The burgundy flags on the shafts go up in flame. Their weapons melt in their hands. They scream as the molten iron eats their flesh.

“You are wrong. For you have overlooked one detail.”

Those men retreat and two fresh subjects on either side replace them. They are ready to repeat. Galek will not allow it. As Draggil tries to form a counter response to my threat, the sea explodes. Beads of water spray at the men and destroy their sight. Galek blinds them and a few fall into his black, watery maw below. Galek rises and I meet the eyes of two water-born lions. He speaks to me. He tells me that while immortal I have been, it is my time to leave the world. He will oversee the future of my treasure locked in the tower. In time, my daughter’s flesh will become his. But I have given her the secret to winning the battle against Galek. Even he will not suspect it.

Galek surges forward and destroys the garrison. I am swallowed in the torrent. Gone at the next moment. When the sun rises again, Firemarch will be under the sea. Most of it at least. There is a hill at the top of my kingdom, surrounded by trees and grasses. A tower stands there. Galek spares my daughter for future prospects.

The price for my immortality was one half my soul. The second destroyed my enemies, myself included. Firemarch will be written into the historical texts. I will be influence over whichever scrivener will transcribe those words. I’ve already prepared something.

Falleth Firemarch to the sea, but beareth from the vast blackness of the waters came a Goddess. From a tower wrought of iron and stone. Smote, demons will be, cleansed from the country. For the Goddess is beautiful and kind, born of men who could not equal her. 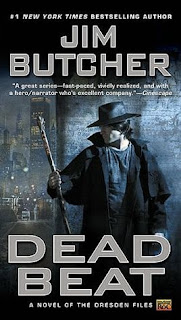 When a killer vampire threatens to destroy head of Special Investigations Karrin Murphy's reputation unless Harry delivers the powerful Word of Kemmler to her, he has no choice. Now Harry is in a race against time to find the Word before Chicago experiences a Halloween night to wake the dead.

I took a little break reading the Dresden Files when a slew of other series caught my attention. But, Harry Dresden hasn't lost any of his flare as Chicago's only professional wizard-for-hire. Dead Beat kicks off as one of the best of the series so far (in my opinion). It has a justifiable level of action and intrigue from the start. There was a few plot points that I found to not be tied up, but perhaps they're being left open for the future books.

In Dead Beat, Harry finds himself at war with some vampires of the Black Court. The Queen of the Black Court, Mavra, threatens to destroy Harry's mortal companions if he does not help her recover the Word of Kemmler. From this point, the mysterious past of a legendary necromancer named Kemmler takes hold of the plot. Various parties now seem to be after the Word, namely other necromancers, who are trying to complete Kemmler's studies. However, the completion of Kemmler's work quickly turns into an epic power play that shuts down all of Chicago. Throw the Halloween wrench into the mix, and Harry finds himself pitted against uber-powerful necromancers on the one holiday that can empower them beyond his ability to stop.

Down the line, and this becomes my favorite part of Dead Beat, Harry is inducted into the Wardens, the special police of the White Council of Wizards. He reluctantly accepts and then a war erupts. Here, the most action in any Dresden book comes abroad. There is a good three chapters drawing out this battle between the Wardens and Kemmler's students. Fast forward a bit and it turns out that if Harry doesn't stop these students, the ritual they're performing on Halloween will turn one of them into a god. If this happens, there will be no hope of the White Council to stop them.

There ware some fantastic secondary characters introduced in Dead Beat also, namely a cowardly little mortician named Waldo Butters, or just Butters as Dresden calls him. We also get to meet the other Wardens who, in the past, have tried to hunt Harry down for his unorthodox wizardly doings. My favorite secondary character here is not new at all. It's Bob the Skull! A good deal about his past is revealed in Dead Beat.

That's about it. Dead Beat was intense, the plot very fast, and overall, an awesome read.

Up next for review: 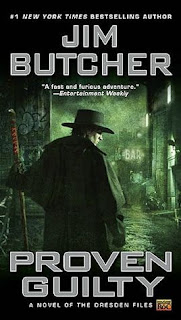