It's true, it's true! My fantastic, super critical, but dearly loved and tremendously helpful critique partner, Elena Solodow, has advanced as a quarter finalist in the 2011 Amazon Breakthrough Novel Award competition.

The odds for her advancing this far are undeniably overwhelming, but the chosen excerpt being showcased really prevails in her favor. I don't want to brag, but it's amazing. Please visit this link: Whip-Slip free Kindle download to read what brought her this far. This is a shameless plug to highlight Elena's achievement and I, along with her other fabulous critique partners, wish her the best of luck.

The Nature of Magic Blogfest

Return to Tessa's page for the links to the other participants.

Although this scene will probably scraped, at best maybe reused, here's an example of magic in my world. The scene is from my manuscript, Bond of Darkness.

“One chance,” the voice said, copying Valence’s words. “You got it.”

The poison surged and Valence faltered as he attempted a step. Black-Skin hadn’t turned to regard him.

“Focus everything you have left. Tap your reserves. Don’t reach too far. I’ll hold off the poison.”

Valence spat a dribble of blood and glared at One-Horn’s muscle-parting back side. He eyed two shifting patches of skin, drawing a target. He circled One-Horn in his mind, forming the path for the magic to travel. Valence took the Pearls up, balling them tightly in his palms, and pushed on his will. The channel for the incantation grew wide, breaking the boundaries of the center aisle. Not much was left of it after One-Horn’s tirade, but enough to use as an anchor. The pinched the channel off with a grunt, closing any small escape.

Black-Skin raising his saber to King Pallanza broke the door open on the channel.

“Zinthos Ragnora!” Valence shouted. The channel roared, a whirlwind of force pushing the bloody, unoccupied Imperial armor aside. A white luminescent glow thrummed around his body as the magic rushed out of the Pearls. It pulsed and drove forward, catching the full width of the channel.

Black-Skin swiveled, disappearing behind One-Horn as it turned its face into the ethereal blast.

One-Horn’s skull went left while its body tore right off the bones. Muscles displaced, quivering in the heavy gust, and splattered to the floor like chunks of fresh steak. Its legs were taken from under it, disintegrating to nothing.

When the channel closed off, the static charge of the Pearl magic left frost clinging to the pew remains. The shadow of Black-Skin came for him, but Valence dropped. His weight crashed through the marble it felt, tumbling endlessly.

He’d awake in the clouds, wondering if he would remember Black-Skin killing him.
Posted by Justin W. Parente at 9:00 AM 14 comments 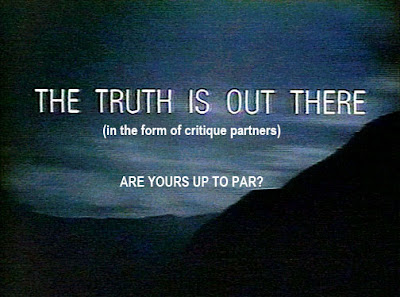 So this comes from experience, as most unpublished writers might have experienced. A few days ago, the manuscript I cherished and loved, put tender care into (literally sometimes thinking over just the right words), got a fierce slap in the face. One of my critique partners tore it shreds, beat it to a pulp, and stomped on it.

However, those shreds weren't burned, the pulp not used for a shake, or that boot that did the stomping was more like a slipper. The slap in the face was like fuzzy gloves.

While her comments reached the very core of my story, showing me there was no true plot. Nothing connected with linear progression any more. The truth was that my manuscript, over the six years that I constantly edited it and attempted to make stronger, lost a plot. I did so much world building and added so much mythology to my land that I lost sight of my MC's purpose. He was simply walking, doing what he was told and forced to believe it. Nothing was personal to him anymore.

She told me...and here is where I swallowed hard...that I needed to trunk the project, scrap the version it became after six years, and start fresh.

I wanted to pull out my hair!

However, I knew that with all the overwhelming comments she supplied, she must have seen something in it if praise and encouragement equaled those comments. She continued to tell me the parts she liked and should be expanded. But moreover, I needed to start a fresh relationship with my MC. I needed to get more into his head.

Thus, trunking the project and starting something new. I'll return to my baby, my first manuscript, because I AM CERTAIN my story has potential.

If not for my critique partner(s) being truthful to me, I would have continued to edit and possibly query a manuscript that had no plot. I'm thankful to have such fantastic partners who care as much for me as if they knew me in real life. Although we only contact each other through chat forums and email, they never fail to impress me.


Are your critique partners up to par? Mine are!
Peace and Writing Love,

Thanks for such the warm invites to my first SSS post last week. I hope to hop around to more blogs this period and make some comments. Return to SSS for the entrants.

Here is this week's six:

A stiletto came down at Falistar and Valence’s knife left his hand. It cut the dust cleanly, but soared through the black apparition.

Valence leapt. The stiletto sunk into Falistar’s neck, the skin bursting like a stretched bed sheet. Blood sprayed through the apparition’s body and it detached. It assumed a gassy form as Valence tried to tackle it, and was gone.