So since my post a couple weeks ago about looking for beta readers, and after exploring Nathan Bransford's forums, I was fortunate enough to meet up with the perfect critique partner. And she is perfect. No you can't have her. She's my own, my precious (sorry Mes, Gollum slipped out there).

She's an intense line editor and just what I needed for my final overhaul of Bond of Darkness. Line edits are a bitch and so is she, and I mean that in the most gracious and thankful way possible. Those were her exact words to me. "Don't think I'm a bitch, but I crack down on line edits." I squealed with joy when she told me that.

So here's to you, Mesmerix! I hope we both have a long and successful beta read together for BoD and GEM, and more after. Thanks for everything so far.

So, I recently read a blog post about writers becoming too attached to their manuscripts. There was a particular interview by a publisher on this blog post about the length it should take to craft a novel from planning to end line edits. The publisher went on to say whenever he gets an unsolicited query by a writer, often a new writer, and he happens to see a line that they have been working on the novel for 6+ years, it sends up a red flag. This means, he said, that the writer had become too attached to their manuscript and cannot bear for it to leave their side.

I know I have become one of these writers. My novel has been in planning, to the day, for a total of six years, but I have only been writing the actual manuscript for coming on 4 years. This 4 year length includes three full, hard edits -- including one massive overhaul to the entire structure of the world I created -- along with some character additions.

Does this mean that I would send up a red flag to this same publisher if I, a new unpublished writer, would send my unsolicited manuscript to him? Granted, I would never tell them the length I have been working on the manuscript, but they I hope they might be able to see the polish in it to make an assumption. They could think, "Hey this guy wrote a slam dunk of a novel."

So where is all of this leading? I believe that a writer can become attached to their manuscript, but why at any point should this be considered a weakness of the writer? Haven't I invested my time accordingly to build a world and story that is absolutely pertinent to what I am trying to sell to an agent or publisher?

There will be lines drawn on this matter and I suppose it is a place where most writers find themselves at some point in the writing process. As for me, I do not see this as a hindrance, attachment or even a weakness. I see this as just a deeper part of the discipline. When I find myself doing a hard edit, I ask myself if I truly need to go through all 400+ pages again and catch small things. Most often, they are not small things, but parts that I just see being stronger or more relevant. Even Fantasy has the ability to latch onto reality and draw out real-life lessons that can have people change the way they think or act.
Posted by Justin W. Parente at 7:10 PM 0 comments

So I casually looked at my latest attempt at a WiP last night around 11. Why does it seem that this small piece of a chapter (only 4 pages so far) sounds so much better than my current manuscript material. Granted, it does not belong to the same genre so I guess there is an explanation in that.

I have to say that I never saw myself writing much else besides Fantasy. It has and always will be my first love. I have done small writings for my minor portfolio, some of which I hope to revisit later (ie: Mephistopheles).

So the current WiP is a long awaited project attempt with Tara (@SuiteMagic). We decided after she having written almost 3 full manuscripts of the YA Fantasy genre, and I bits and pieces of 2 Epic Fantasy manuscripts (3rd in planning), we needed to get away from Fantasy for a brief time.

Alas, this is the challenge of a WiP. We plan to use the Catacombs of Paris in it, too, which is an amazing setting alone. I hope this project works out. It seems my writing is somewhat stronger here, but I digress. Tara and I agreed that this will be another project for us to work full-steam on once we move to Florida.

Thanks for reading and bye for now!

Email ThisBlogThis!Share to TwitterShare to FacebookShare to Pinterest
Labels: WiP

So in this latest version of my query, which I believe I will use until I hit that dreaded 1:10 ratio (that is 1 partial or full request to every 10 agents queried), I am struggling on this one line.

I'd like to see what you all think and maybe you can give me the idea if it means something to the plot (in such few words) or if I am just getting hung up on it.

So, below is my query, and the line in bold is the passage in question. Should it stay in or out? What does it add?

BOND OF DARKNESS follows a cast in a gritty world of unforgiving secrets, clashing magic and murderous lineages. The manuscript is complete at 115,000 words.

When a deadly infection resurfaces, Valence becomes the pawn of a vicious conflict dating back to the first race of men, but the return of the infection also brings the rebirth of the Warlord who created it. He is thrown into the fires of war, but as revealed secrets amass, Valence cannot be sure if his motives are his own. With the destructive Pearls of Mithrus in his control, he is also granted unparalleled insight into the infection’s history. Valence suspects that he is linked to the Warlord, whether by blood or across time, and races to uncover the mystery of his involvement in the new war against the infection.

Thank you for considering my manuscript.

I hope you can help me through this.

So I discovered a simply amazing website yesterday that is, without a doubt, one of the most invaluable tools to any writer looking to become published. Most of you probably know about it, but here is the link anyway:

Yeah, do it. Why are you still reading? It's called multitasking people. CNTL-T and peruse the website. You will get the daily skinny from agents and publishers, and commentary by other users who have queried those agents you are looking into.

Or the ever sought:

And then your coup-de-grace:

At that point, you dance around. So learn the site and let it guide your querying path. Let it speak to you. Well if it speaks to you, I would consider seeing someone about it.

The second awesome site, but less forgiving, is:

Granted, it is also free and super easy to use, but take absolutely nothing to heart from the other users. This site allows you post your ever-changing versions of the query and get minor feedback on it. Looks like this: 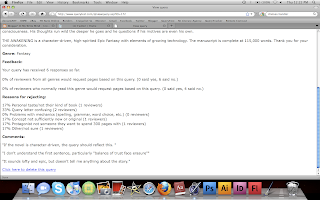 So you get comments by users who get to pretend they are agents. And thus is the advice of taking nothing to heart. Essentially, they know nothing about representation, but you get the insight of another peer giving you the honest slip of how the query sounds.

I suggest all writers use these sites. That's all for now.

So I am going to be looking for some Beta readers in the near future for my manuscript. I am currently in the back stretch of my chapter edits, and am looking for some dedicated readers who wouldn't mind taking a read. I will start with a few chapters at a time since the full MS will round out at about 115k words.

If you care to volunteer, I can begin making a list. Be sure to follow me so I can readily reach you if the need arises.