Review: Beyond The Shadows by Brent Weeks 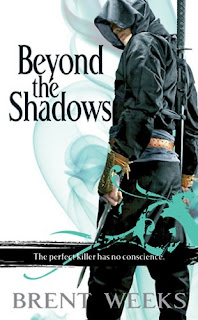 So I took a massive hiatus in reading, writing, and even art. Work was just bogging me down for a long time. Anyway, it took me forever to finally finish Beyond the Shadows. Truthfully, I forgot a lot of the stuff that I read in the very beginning, but when I was finally able to sit down and pound away some pages, I got back into the swing of Weeks' world.

The only reason I gave this final volume of the trilogy four of five stars is because is very long. Long books are great. Long books with great characters are even better. However, there are WAY TOO MANY characters in this entire series. Some have all the face time while others are below third-supporting characters. They're basically mentionables.

However, into the grit of the story. Weeks finished off the Night Angel Trilogy with a massive blow. While I followed the boy Azoth as he became Kylar, an enigma and soon to be one of the most legendary Wetboys (assassins) in Cenaria, his character is every part of every other character's role in the series. He is connected to almost everyone. By meeting, speaking, humiliating, or killing.

The battle for Cenaria closes with Kylar finally earning his right as THE Night Angel. He is judgment and retribution, death and life, but he is lover and compassionate man at the end. Kylar's growth spans the whole series. If you ever find your to-be-read list running thin (which most readers don't), I would certainly recommend adding The Night Angel Trilogy to your TBR. The world is vast and rich, the magic and lore so woven into dialogue and mannerisms, it sold me from beginning to end.

Weeks has recently put out the first novel of his second series, The Black Prism. I hope to get to that one, but I also recently found out Weeks is set to publish (soon) a Night Angel novella, Perfect Shadow, which will tell more about the rise of Kylar's witty mentor, Durzo Blint.