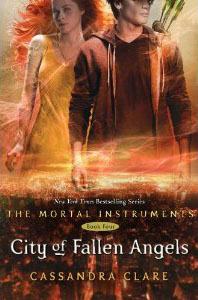 Who will be tempted by darkness? Who will fall in love, and who will find their relationship torn apart? And who will betray everything they ever believed in?

I still remember the day I downloaded the sample of City of Bones. One week later, I blew through the first three books of The Mortal Instruments. It's the kind of YA fantasy that has characters you become attached to from the first meeting.

Now here, in the fourth installment of the series (something no fan of Clare saw coming), we're going to deeper into the world of Shadowhunters and Downworlders. The conclusion of City of Glass left a lot of us wondering what could have happened after "happily ever after" resolution. Of course, it was far from a "happily ever after." There were the hints that there was more story to be told. Is Valentine dead (again)? What's to become of Simon? Can all those hurt repair their pain after Valentine's war? Will Clary and Jace be together despite the truth? And something we all want to see happen, will Magnus and Alex be together?

I'm excited to jump back into this world. Review of City of Fallen Angels to come.
Posted by Justin W. Parente at 9:45 AM