Today's the day of my blogfest! Hoot and holler! Here's your LINK to the participants.

Below is my entry, starring Valence. He's been around in all the other blogfests. Returning readers get to meet him from the start now. Please use the questions below to judge your thoughts on the piece. These questions are only suggestive guidelines to follow. 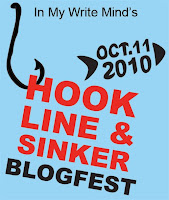 Enjoy!
* * *
Everything around Valence seemed frozen as he looked up to the speckled sky. Something about the night always fascinated him. Perhaps it was the partly heightened sense of seclusion, but he knew it was also the way the cosmos wrapped around the land—just like the daylight—and created a realm perfect for a Lunata. He sat amidst the moon glow and still air, thinking just how different the Lunata were from the myriad land-people of their world.
“Can’t sleep?” a dry voice asked Valence.
Valence brushed the comment aside and unbuttoned his shirt. He walked his fingers down to the large incision that was shining red in the moonlight. Sighing, he took up a semi-damp rag and cleaned the blood away in soft pats. Sleeping hadn’t been an option for him in fifteen years.
He dropped his head into his hands, and murmured the words for comfort, “Irien’s death was an accident.”
It was all a misunderstanding, and that was a crime. The Lunata culture thrived on persecuting misunderstandings, even if the odds were in his favor. As much as he tried to assure himself he was wrongly exiled, the nightmare still found him.
“Forgetting something etched on the soul is impossible, you know,” the voice said.
The grass ruffled near him, but it was tall and thick, and even he couldn’t see through it with his normal hawk-like vision. He whispered an incantation that sent out a powerful white flash and he scanned the area as the light peeled through it. Within the light, he also summoned an aura trace which propelled outward in a silver ring. His eyes instantly moved to a glow at his right, but it belonged only to the eyes of his mare. As the light died off, replaced by the moonlight, so did the trace.
He groaned in defeat. The ever present voice, however helpful or obscure it chose to be, was also poking around in his head and seeking painful memories. Valence raised his aura shields, creating a dull silver sphere around his camp, and a sharp pain instantly drummed through his skull. Despite his lack of vitality, he would make the shields hold. He removed a flimsy leather journal from his rations pack and flipped to the third page in.
“Voice spoke twice with no counter-shielding,” he wrote with a dull pencil. “Aura trace comes back negative each time.” After heavily underlining his words, he tossed the journal and pencil aside frustrated. There was nothing more he could do this evening except try to sleep, as painful or impossible as it would be.
In the wake of yet another sleepless night, Valence broke down his camp and surveyed the tall grass one last time, again finding it empty. For all the time the voice had been speaking to him, he never once could make sense of it. He scowled at the voice while tying his packs back onto his saddle.
Three leagues later, he arrived at the south customs gate of the Human kingdom with its sleek walls overshadowing him. His white hair was now dirty blond thanks to a simple incantation and he tugged his cowl low as he steered his mare under the arch.
“Welcome to Agress. Your papers,” the customs inspector said, hand stretched out.
Two other men, one thin-framed and the other more portly, appeared from the opposite side of the gate.
Valence offered his traveling papers and merchant license. His mare scraped her hooves excitedly on the flagstones and he slid his hand down her neck, shushing her as the two other inspectors walked up to his side. “Is there a problem?” he asked after noticing the first inspector was examining every detail of the papers.
“Where are you coming from, stranger?” The inspector flipped through them a fourth time, mulling over all of Valence’s previous destinations and customs checkpoints. “Your customs stamps aren’t up to date.”
Valence sighed and his aura surged while the inspector stared him down pointedly. Silver wisps smoked around his body, invisible to the men, and he invaded the inspector’s mind. The inspector looked up, his eyes fluttering, as Valence made him forget the issue with his papers.
“On second thought,” the inspector said, “you’re free to pass. We’ve simply been looking for a rat-faced swindler who has been dipping into the Advance Guard’s commerce vault. We believe he’s just a common drifter, so we have no true mark on him.”
“That’s a sin against you fine men,” Valence said, knowing they’d never catch the imaginary thief. “I’m certain the Agressian Duties Bureau will apprehend him soon enough. After all, the Advance Guard are the best in the land, don’t we both know.”
“Rightly so, good stranger. By the way, where do you hail from?”
“I’m just a lonely delegate from a tiny island off the southern Seringarden coast, a good three days from civilization.”
“Seringard is half a world away, friend.”
“That it is.”
“And the Villa-Idian depression hasn’t frightened you away yet?
Valence’s mare snorted and whinnied. “Not yet, Inspector,” he said. “Am I free to go? Forgive me, but I forgot to mention I was joining the congregation at the hour past noon.”
“Oh, of course, my friend,” the inspector said. He motioned the portly man to raise the gate, which he did immediately. “Please, my friend, go. You do have my greatest apologies, sir. Should I write a letter for you, in case you’re stopped again?”
“An unnecessary gesture, but appreciated all the same,” Valence said. “You good men need assurance that not all of your misdoings get made known publicly.” He pushed into a trot. “Good day.”
Posted by Justin W. Parente at 9:13 AM